When I first decided to build my message around the term “Rare Faith” (based on the quote by Boyd K. Packer), I checked on buying the domain RareFaith.com. It wasn’t available, but RareFaith.ORG was, so I went with that. Occasionally over the years I’d check on the .com but it was never available, and it wasn’t being used.

In 2018, I contacted the owner to see if he was willing to sell. Price asked was higher than we were prepared to pay at that time, and since we owned the .org, we were okay without it.

Fast forward to September of this year, and the owner contacted me again to see if I was still interested. I replied that I was, but my email bounced. I tried to reach him another way, but never got a response.

I was reminded to Keep Calm and Watch What Happens.

Two weeks later I thought to dig through my old messages and found our earlier correspondence and another email address for him that I had forgotten about. Meanwhile, I’m watching to see if his registration expired in case he was just letting it go, but instead I noticed he renewed it.

I replied to the third address, and finally reached him. This was his reply:

I get a regular stream of email to XXXXXXX and I
recently deleted all of it because it’s mostly bordering on spam?
Maybe I deleted something from you?

For some reason, I received several emails at the same time from
different people asking about purchasing that domain name?

With that came a couple of problems I had – and have –
with selling it:

2. I did not want to sell it to someone who intended to resell it.
for a profit. I’m guessing that’s from my own greed or something?

3. Even though I own several domain names, I do not have a clue how
to “push” it to you? Ah-ha, that’s a term I know about,
but don’t really know?

However, I do know that in order to sell it, I need to get it from me
to you and from my registrar (internetbs.net) to yours.

Now that I’ve got that said, I’m ready to move on here:

Because I have had, and continue to have, such a difficult time having
the slightest idea of a dollar value for rare faith
(I mean think about it? Can a person ever put a value on faith, much less, rare faith?)

Never the less, Leslie, to go along with that degree of personal faith,
I could really use some guidance on what to do with my own — faith, that is.

From looking over your own “Mindset Mastery“, I believe it would be the perfect companion
to my own life, struggles, and faith indeed.

So, I would gladly trade the domain name for the course “Mindset Mastery”.

choose one of your “Mindset Mastery” courses to trade for it.

You, of course, would choose which one depending on:

1) how much the domain name is worth to you.
2) how much you would be willing to help thrust my life out of financial misery into heights unknown
with your own knowledge and course.

And if you would rather not do that, let me know and we will definitely work something out.

I bought it with the full intention of blogging about my own life, Salvation and ongoing Christian
experience but simply have never gotten to it.

If you have a use for it, I would love for you to have it. The only drawback is the fact that unless
you know how — I will have to learn how to send it to you.

And if you choose to trade it for one of your paid courses I will pay any cost incurred in getting it to you?

Ok, I think that covers it?

…Well, I skipped journaling this morning but must say it’s more fun talking to you.

Long story short, I gave him Mindset Mastery Guided PLUS and we’re both super happy.

The Rest of the Story

After Mike joined the Mindset Mastery Guided class, we invited him to share the story from HIS point of view. Here was his response, in his own words:

I bought and created a domain name 2 or 3 years ago, RareFaith. com. I had been more or less persuaded that writing about my sordid life of pain and misery would somehow help others, while I helped myself make some money from a book.

I am not new to writing about my past. I was led to believe if I wrote about it with strong feeling and emotion enough times, it would leave me alone. It didn’t. This very day, I know it was bringing me more of the same and erasing all my efforts of believing in something better.

Well, the fact is, God was trying to tell me a couple of years ago. I’m sure of that because after I had that domain name, I couldn’t write about my past anymore. However, I somehow felt like I was still the steward over the domain name RareFaith .com? It was what I wanted – Rare Faith. But I could never quite touch it, no matter how hard I tried.

Anyway, several months ago people started wanting to buy the domain name, but I didn’t really want to sell it? It seemed like it was my last link to ever making anything better. Of the people inquiring about it was someone named Leslie?

I quoted her a price, but she along with the others passed. A few weeks ago the domain name was about to expire, and I had decided to let it go, after all, no matter how much I knew about faith and attraction, nothing was working for me.

But, then through another turn of events in my life, which is indeed something in itself, I couldn’t let it expire, and renewed it once again. Only this time, I had this vague notion that someone wanted it, and I was to get it to them or something of the sort?

I dug out the emails of the people who had asked about it months before and asked them if they were interested. Leslie was the only person who responded, and said she may be interested?? But something happened that hadn’t happened before.

I saw the name of her website that she was corresponding from and went to see if I thought she was going to use the domain name, or merely sell it for a profit. I was going to hold out for someone who ……..I have no earthly idea? More money? I don’t know?

I wound up on their site RareFaith.org and even though I didn’t completely get what they were doing or who was doing it, I immediately sensed that 1) they had what I had been looking for – for a long long time. 2) They were supposed to have the domain name RareFaith.com, not me.

The Householders now have the domain name they wanted for their business and I have the opportunity to take my life and being to heights previously unknown by myself. But how high isn’t nearly as important to me as a sense of victory to replace the aurora of defeat I have lived in for so long.

I have a lot of knowledge about the mechanics of using faith, of which I have a definite right to through the blood of Jesus Christ ☼ but have continued to live defeated.

In two days of going through the 13 introductory lessons and listening to audios on the blog, I know more about why that is, and what to do about it than ever before.

I am grateful to be here.

Leslie Householder is the award-winning, international best selling author of The Jackrabbit Factor, Portal to Genius, and Hidden Treasures: Heaven's Astonishing Help With Your Money Matters. Since 2002, she has helped people all over the world discover and apply the Rare Kind of Faith that causes things to happen for powerful life changes. Through story and shifts of perspective, Leslie aims to help her readers crush every challenge, achieve every goal, and vanquish every monster under their beds. Above all, Leslie is a dedicated wife and mother of seven children.

“We couldn’t pay our rent”

Predicting Prosperity – Why your future is no secret

The luckiest man in the room 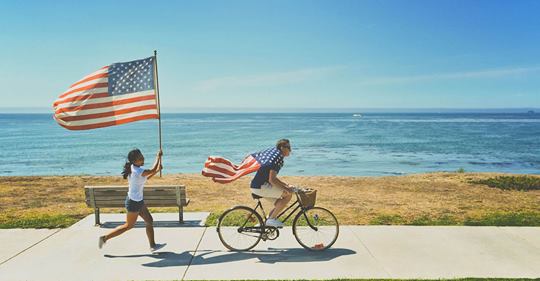 America, Where Goest Thou?