There are two kinds of people in this world.

There are people whose last peanut M&M in the bag always has a rotten peanut in it. And then there are those whose entire neighborhood floods, and they choose to go kayaking down the street in it!

In all honesty I can say that I’ve been both. (I never had my neighborhood flood. But I have jumped and played in a mess of leaves we had to clean up! That’s something, isn’t it?)

I don’t know about you, but I’d like to be in the more positive group. And yet, what are we supposed to do in the middle of opposition?

We’ve all heard the saying, “Hindsight is everything,” and there is truth in that. It seems that every time some major challenge hits, I can find a huge blessing attached to it in the end.

I may or may not have seen the good in the moment. Okay. I seldom saw it in the moment. But that is changing! I’ve learned a new Law of Thought, and I am ready to live it!

So what is this new law?

It’s called The Law of Polarity, and simply stated, it is that there is a good in every bad. We can actually look for the good and believe that more good is coming. Let me share an example.

I grew up in a generation where a man works at the same company his whole life. My dad did just that. However, this has not been my husband’s experience in the software industry where there are layoffs every 18-24 months. My husband has faced many layoffs over the years – some that he survived, and some that he didn’t. And it stunk for all of us.

We were without work for just over a month, and we were so relieved when the new job came!

Here’s the cool thing with the “hindsight” I mentioned earlier. We saw a bunch of blessings that came from this challenge.

We had been trying to get our house built for 4 years while living in his parents’ basement. His work required 2 hours on the road each day, so by the time he got home at the end of the day, he was exhausted. Thus, we never moved forward on the house. We had finally decided to purchase a modular home just to get out of the basement. He lost his job at the optimal time of the year to pour a basement. Being out of work for those 30 days gave him and his dad just enough time to get the basement ready for the house to be delivered! He finally had the time he couldn’t find to get us into a house. It was a huge blessing!

The Law of Polarity is real. Believing this allows us to be classified among those that look for the rainbows in the storms of life and the silver linings on those thundering clouds. And who wants to think about those nasty peanuts in our candy anyway? 🙂
____________

For more on this topic, read Hidden Treasures: Heaven’s Astonishing Help with Your Money Matters (free). 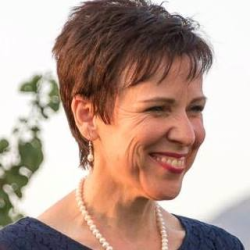 Changing our Thoughts to Change our Lives

“I started planning for the miracles”

It will find you

The terror barrier was me!

Allow it to come fully formed

“It’s time for me to start LIVING!”

It’s not about the dollar figure