It happened in spite of me

Twenty years ago I was miserable and could see no way out of my situation. My husband had uncontrolled epilepsy and had a difficult time holding down a job. There was a twelve-year period of time when he was unemployed more than employed. I blamed his seizures for everything that was bad in my life, even though I knew he didn’t have them on purpose. At the time I was working for the Church of Jesus Christ of Latter-day Saints as a secretary to one of the general authorities.

During an especially difficult time, I asked my boss if he would be willing to give my husband a priesthood blessing. I hoped that maybe a blessing from a general authority would have more clout than all the others he’d received over the last 15 years. Of course, I was hoping that the blessing would be for the seizures to miraculously stop and my life would become normal. That didn’t happen. Not only was my husband not blessed with relief from the seizures, but he was promised he would be able to provide for his family. In my mind, that was the dumbest statement in the world my boss could make. Provide for his family? Ha! How in the world is that going to happen? He can’t even keep a job. Nobody in his industry wants to hire him. Instead of feeling grateful, I was angry. Very angry. I wasn’t going to get what I wanted. My life was going to continue to be miserable. Thanks a lot!

I don’t know how we even survived during those years. I had jobs, but certainly didn’t make enough to meet all our obligations. One of my biggest concerns was how we would ever survive in our retirement years. With my husband’s heath as it was, I KNEW there would be issues. Would I need to put him in a facility? How on earth would I afford that? If I couldn’t afford it, could I handle taking care of him? How would we ever survive financially. We were in debt up to our eyeballs and I saw no way out. For years I continued to fuel my doubt and anger at my unfair lot in life.

Fast forward to today. My husband has been seizure free now for almost 7 years. He is healthier than the vast majority of men his age—71. Our relationship is better than I ever thought it would be at this time of our lives. Of course, I never thought he’d even live this long. Our only debt is our home and cars. Last night we were working through some financial things and realized that because of some decisions we’ve made over the last couple of years, in 3 years we will be in a position to live off of the interest of a particular investment.

This was not a goal I wrote down or envisioned. It wasn’t even something I ever saw as a possibility. I didn’t have a time where I allowed myself to daydream. I was totally convinced there was no solution because I couldn’t see one.

So how did my life take such a drastic change?

I have struggled at times with the steps we are taught to take with Rare Faith because I believe the greatest things that have happened to me, happened in spite of me, not because I followed the prescribed formula. I’ve come to realize that when my deepest desire is to do God’s will, there are a lot of things He will do to compensate for my inabilities, which include not manifesting “correctly”. And oftentimes the effort I make in His direction may not feel like a lot.

In my case, I started by letting go of the anger and having a desire for God to help me be happy in my marriage, despite my husband’s condition. I made a commitment to pray and read my scriptures to develop a closer relationship with my Savior. He just kind of took it from there, leading me to where I am today.

I love the laws of thought—mostly because they teach me how God works, not how I have to work. My faith is in Him and I trust that He wants what is best for me. Sometimes that means I have to wait for those things I desire.

Sometimes that means I’m receiving what I desire in a way I didn’t expect. My experience is a perfect example of the law of gestation. I can’t begin to explain here the amount of schooling I’ve been through over these last 30 years, but I know it’s all been part of the necessary process to help me become like Him, and that’s my greatest desire.
I share this for those of you who might be struggling in similar ways. I encourage you to trust that God knows what He’s doing and that He works through these and other laws. You can bank on it! 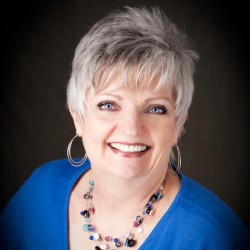 Cosette Snarr
I’m a mother of four, grandmother to fourteen. I love to write and teach and help people see how they can have a happier life through changing their thoughts and trusting in Christ.

Worried about my child

From butterflies to paid-off cars

Happier in the Delusion, From Now On

Are you kidding me?